Sometimes my curiosity just gets the better of me. I read someone mentioning an obscure novel they cannot locate or an author that has little information about them online. "Ah!" I think. "I should see if the Cincinnati library has a copy of that book." Or "I should Google that author and check WorldCat." So the adventure starts!

A few months ago I checked a favorite blog, Furrowed Middlebrow, which specializes in lesser-known British, Irish, & American women writers from 1910 to 1960. I found his list of American authors with last names beginning with C, wherein I noticed the elusive Lily Bess Campbell:


A longtime UCLA professor and scholar of Renaissance and Shakespeare studies, LILY BESS CAMPBELL was the author of a single novel, about which details are sparse. These Are My Jewels (1929) is described in one source as a satirical novel, and a bookseller says it's about "a mother of the 1890s who ruins her children."

I was up for a challenge! The Cincinnati library did not have the book, however the wonderful OhioLINK system did locate a copy at Ohio State University and send it to me. It's an original First Edition, published in 1929. So I have now read this scarce novel, and it is indeed a satire on parenting with nice doses of humor and a bit of sarcasm thrown in for good measure. It consists of two chapters called Book One and Book Two. 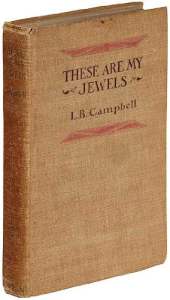 Book One: In Which a Mother Equips Her Children For Life

It opens with the June 1888 wedding of Violet Francis Foulkes to James Whitten Masterson in Wisconsin. Thereafter the omniscient narrator always refers to her as Mrs. Masterson. Since very little information is available about this book, I will quote from it more extensively than I normally would in a review to give you the flavor of the writing. This delicious gem starts on page 1, after the paragraph about the wedding.


In 1888, times had not yet begun the habit of changing, so common in later years. In fact, times were both good and old as well as changeless, according to those who admit the ability to remember 1888. In 1888, then, smoking and swearing and short hair and pajamas and reading the newspapers at breakfast and belonging to clubs and sowing wild oats were the prerogatives of men only. But women enjoyed the high privileges of corsets and bustles and high heels and playing the piano and crying over poetry and being always the better half in any marriage; these were the special prerogatives of women, like having children and cooking and not bothering their pretty heads about things.

A little while later the narrator tells us that


Mrs. Masterson was a progressive before the days of progressives. She was independent, radical, unashamed, long before votes for women and economic independence and bobbed hair and sex experience were dreamed of heresies.

The rest of this first book shows us Mrs. Masterson raising her four children. She is very overbearing and what is today called a helicopter parent, although the narrator always sees the story from her viewpoint and phrases it so that she seems a paragon of modern motherhood. When the children are very little she gets them a cat who becomes pregnant. She tells them about mothers carrying their babies inside themselves


and how every child belonged to its mother... And they knew that they had hurt her when they were born. And they felt very, very loving toward their mother. And they promised always and always to love her more than any one else in all the world.

She makes them repeat that promise nightly.

Book Two: In Which a Mother Protects Her Children From Life

In the second book we see how the children turn out. Her son Harry elopes with a girl named Carlie and they have a baby girl. Mrs. Masterson constantly undermines his wife and tries to take the baby away to raise it herself. The story of Harry and Carlie is the longest one, and we see in detail how Mrs. Masterson runs Harry's life. Eventually Harry and his family move away to St. Louis, at the recommendation of his father. Mrs. Masterson is miserable.


It was hard to think of him facing a world without his mother - with no one but Carlie to help him. And Mrs. Masterson knew he could never really love Carlie. She knew that it was only the children that held him. And she knew that her boy would always keep his mother first in his heart.

The other children don't turn out as Mrs. Masterson had hoped, either. Jim goes off to the First World War and is killed. They discover he was married in New York before he went overseas, but Mrs. Masterson refuses to accept it.


Jane Osgood was not really Jim's wife. She had lived with him for only one week. Jim had always said that he loved his mother more than anybody else in all the world, and she knew that he did.

Violet marries but only on the condition that she and Ted live with her parents, which doesn't work out. She has a child, but Ted leaves her.

Maurine escapes and has her own life. She works for the war effort in various cities around the country. At the end, she tells her mother she's getting married in New York and they can't meet Sammy or attend.


She was sorry if she hurt her mother, but the family had had pretty bad luck about marrying, and she just thought she'd try it alone.

In the end, Mrs. Masterson has messed up the lives of Harry and Violet. Jim dies and she writes his wife out of her life. And Maurine is the only sane and sensible one who leads her own life, which of course makes Mrs. Masterson unhappy.

The book is short and has small pages with wide margins, so is quickly read. It was fun to read about and laugh at Mrs. Masterson. I also enjoyed the details about life in the US between 1888 and 1921. This was the only novel written by Lily Bess Campbell, a scholar of Renaissance drama and an eminent Shakespearean authority who taught for many years at UCLA. She was named Woman of the Year by the Los Angeles Times in 1962. She apparently never married or had children, and certainly had progressive ideas for her day.

One interesting fact I uncovered is that this book was the very first one ever published by W. W. Norton and Company. It seems unusual to stake your business on an unknown author's first novel.