This is an amusing little book of short pieces by Olivia de Havilland, the retired actress who won 2 Oscars and many other awards in her long career. On the eve of her 100th birthday, the 1961 book was reissued with a short interview with Miss de Havilland as she turned 100. 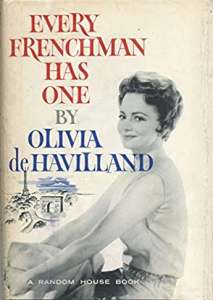 She fell in love with a Frenchman and moved to Paris in 1953, where she has remained up to this day. In this book she humorously recounts many incidents that happened to her as she learned to be French. As the publisher's blurb puts it, "her skirmishes with French customs, French maids, French salesladies, French holidays, French law, French doctors, and above all, the French language are here set forth in a delightful and amusing memoir of her early years in the City of Light."

Her style is light and funny, as though she were an old friend telling you of her adventures with as much wit and exaggeration as she could get away with.


Of course the thing that staggers you when you first come to France is the fact that all the French speak French—even the children. Many Americans and Britishers who visit the country never quite adjust to this, and the idea persists that the natives speak the language just to show off or be difficult.

On a long, cold, grey winter day, this would be a perfect pick-me-up accompanied by a cup of something hot, especially if you, like me, have a soft spot in your heart for Paris.