It's going to take me a while to digest this book. On my first try, it stymied me. What WAS it? A comic book? A graphic novel? It had colorful but messy, seemingly unrelated pages and sentences, some handwritten, some typed, in many different colors and styles. Confusing sensory overload. I returned it to the library. 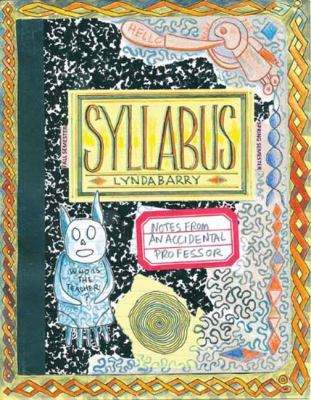 Second try. Well, this is about or from a course Lynda Barry taught at the University of Wisconsin at Madison (my alma mater), so it must make some kind of sense. I'll just try reading it page-by-page, word-by-word, image-by-image and see how it goes.

From the Syllabus alone, I can't quite envision this course, but I have found the original description published by UW Madison when it was offered in Spring 2012.

Open to both graduate and undergraduate students from all academic disciplines, the focus of this class will be the relationship between the hand, the brain, and spontaneous images, both written and visual. No artistic talent is required to be part of this class, but students should have an active interest in spontaneous memory and ideas, how pictures and stories work, how the brain works, and what the biological function of the thing we call ‘the arts’ may be.

Class time will be used for active studio work, creating projects entirely by hand, evenly divided between writing stories and making pictures. Students will be required to complete a handmade book by the end of the semester and to teach at least one off-campus writing or picture making workshop using the techniques developed in this class.


The book's review in the London (Canada) Free Press by Dan Brown says:


It is not a graphic novel per se, but the cartoon equivalent of free-form jazz; there is a structure, but that structure is just something on which to hang big philosophical questions, such as "If the thing we call 'the arts' has a biological function, what is it?"

Plain words cannot convey the reality of this book or the course. Once I spent time decoding it, absorbing it, immersing myself in it, I was hooked. It's an intense experience, this blending of writing, drawing, and listening, one I want to repeat. My copy of "Syllabus" should arrive soon! This time through I plan on taking the course, or duplicating what I can on my own. I want to do a lot of writing and crafting in the coming months, now that I have closed my online shop. Barry's way of experiencing the world and interacting with colors, pencils, images, and sounds might just help me become more creative and productive. It will certainly be a lot of fun.

Below I am listing quite a few resources that relate to Barry and her books - she has published a lot of them. Do check out the sample "Syllabus" pages posted online by the publisher to get a better idea of what is contained within this amazing book! I highly recommend jumping into Barry's wild and colorful world!

A 9-page PDF excerpt from "Syllabus" provided by the publisher:
https://www.drawnandquarterly.com/sites/default/files/docs/samples/SYLLABUSwebcerpt.pdf

Her author page at her publisher, with links to many podcasts and videos with Lynda
https://www.drawnandquarterly.com/author/lynda-barry

It's Classics Club Spin time again! Each Clubber has a personal list of 50-100 classic books that we have chosen to be our challenge list. For the Spin we pick 20 of those titles and put them into a numbered list. On November 27th the Club moderators will pick a number from 1 to 20 and we have to read that book on our list by the end of January and report back to the Club. Usually we get one month to read the book, but for this Spin we have two months because it's a Chunkster version and the books should be nice big ones.

So here's my list! I want to read them all, so I'm not sure if I am hoping for any particular number to come up. I should probably hope for a long, cold winter in which to stay home and read!

1. Can You Forgive Her?
Anthony Trollope
848 pages

3. A Dance to the Music of Time: First Movement
Anthony Powell
732 page

A Migrant Crisis in Our Past 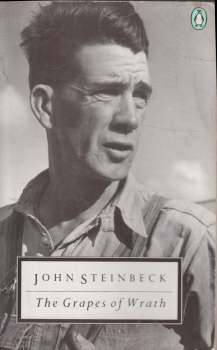 In my quest to read many of the classic novels, I at last read "The Grapes of Wrath", about the Dust Bowl of the 1930s in America. Then while doing some research on the book, I stumbled across another novel which covers the same topic, "Whose Names are Unknown". Although published 65 years apart, they were both written during the Dust Bowl by authors who visited the migrant camps. Sonora Babb was a Farm Security Administration (FSA) worker who took notes about conditions in the California camps set up to house the migrants fleeing the Dust Bowl. The FSA shared these notes with John Steinbeck when he toured the camps. Babb's novel was under contract to be published but was cancelled due to the wide acclaim that Steinbeck's novel garnered. In 2004, Babb's book was rescued from the archives and published by the University of Oklahoma Press.

As a Classic, "Grapes of Wrath" has been critiqued and analyzed many times by authors more scholarly than I am. But I would like to discuss these two books as companion works about an important piece of American history which seems relevant to the world of today.

For me "The Grapes of Wrath" was a slow read, because it was so sad. I liked the book enormously and I can understand that it is great writing, but that's how it made me feel: sad for the individual members of the Joad family, sad for the thousands of people displaced during the Dust Bowl, sad for an America that let this happen. And the characters, no, the people have stayed with me. Critics may call them wooden or cardboard, but as a reader they were very alive to me, each with their own characteristic way of talking and thinking and acting. Some characters were, of course, more distinct, more clearly defined, than others, but only a few were marginal. This is my entry in the Back to the Classics 2018 Challenge, a classic that scares you. 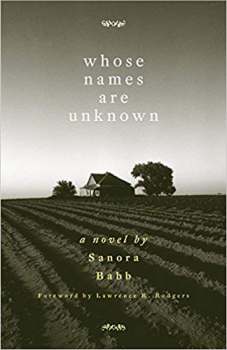 When I read "Whose Names are Unknown" I was prepared for sadness, and it, too, is very sad. The Dunne family and their friends are poor but proud people, determined to escape the Black Blizzards and find a better life in the "promised land" of California. The basic story of their trip is similar to that of the Joads, but told in a much different style. Besides working in the camps, Babb was a native of Oklahoma's arid panhandle and knew about the desperate conditions in both places. The tale is narrated by the mother and is a more intimate, less violent story. Bad things do happen on their journey, but they are more in the background; we don't get blow-by-blow accounts of the violence.

I thoroughly enjoyed both novels despite the sadness quotient. If you've read Steinbeck's you should also read Babb's. Especially since during the current worldwide migrant crises, these evocative books are still relevant.

Dust Bowl
https://en.wikipedia.org/wiki/Dust_Bowl
[T]he Farm Security Administration hired numerous photographers to document the crisis. Artists such as Dorothea Lange were aided by having salaried work during the Depression. She captured what have become classic images of the dust storms and migrant families. Among her most well-known photographs is Destitute Pea Pickers in California. Mother of Seven Children, which depicted a gaunt-looking woman, Florence Owens Thompson, holding three of her children. This picture expressed the struggles of people caught by the Dust Bowl and raised awareness in other parts of the country of its reach and human cost.

Many of the songs of folk singer Woody Guthrie, such as those on his 1940 album "Dust Bowl Ballads", are about his experiences in the Dust Bowl era during the Great Depression when he traveled with displaced farmers from Oklahoma to California and learned their traditional folk and blues songs, earning him the nickname the "Dust Bowl Troubadour".  --Wikipedia


"The Dust Bowl" (2012) is a documentary film directed by Ken Burns which aired on PBS in 2012. The four-part miniseries recounts the impact of the Dust Bowl on the U.S. during the Great Depression of the 1930s. Available on DVD - check your library!
https://en.wikipedia.org/wiki/The_Dust_Bowl_%28film%29


The film "The Grapes of Wrath" (1940) stars Henry Fonda as Tom Joad and Jane Darwell as Ma Joad. Considered one of the best movies ever made, but it does change the plot in significant ways.
https://en.wikipedia.org/wiki/The_Grapes_of_Wrath_%28film%29

Just Say No to Pap


My first Classics Club Spin book was "The Little Prince", scheduled to be read during August and reported on soon after. I am awfully late and it's not only my move that stopped me. I have dreaded writing this review and dragged my feet because... I hated this book. There, I've written it. What a relief.

And it seems that I am not alone. There is a thread at Goodreads entitled "Am I the only one who hates this book?"

Oh, it does have those cute, whimsical drawings that weren't too cloying, I suppose. And it was short, thankfully. But beyond that, there was nothing that I liked even a little. To me it reeked of heavy-handed moralizing and it was wimpy to boot. Maybe it was better in the world of 1943 when it was written, and World War II was in full swing. I only finished it because it was my Club Spin book.

I'm sure that saying such things will gain me criticism along the line that I just don't understand because I am grown up, like the book says. Alas, I fear trying to answer this charge is like answering the old question "Have you stopped beating your wife?" There is no answer. However, in my defense I will just say that I love all things AA Milne, "Olivia", "Little House on the Prairie", and the children's poems in "Silver Pennies".

Onward and upward to far, far better books! "Tale of Two Cities" anyone?

Back At It Again!

Moving is not for the faint of heart, dear reader! After six weeks of sorting, discarding, and packing, followed by 2 weeks of moving all my world possessions, and 4 weeks of unpacking and recuperating, I am ready to read. And blog!

I never thought I could be too tired to read, but I was. During my downtimes I knit hats for charity and watched TV, dreaming of having enough energy to tackle my hoard of books. Add in three weeks without Internet at home, and the result was no blogging. But I'm back.

My current distraction is my first NaNoWriMo (National Novel Writing Month) wherein I attempt to crank out a 50,000-word first draft of a novel. Never a dull moment! If this idea tickles your interest at all, join us - it's not too late to begin!