I re-read the first of the Mrs. 'Arris quartet, "Mrs. 'Arris Goes to Paris" last September, and enjoyed it every bit as much as I had forty-odd years ago. For some reason the book title, author, and plotline had stuck with me all those years. It was probably one of the first books I read that wasn't assigned for school or a classic novel I'd heard about at school. A real grownup's book!

Then last fall I learned via book people online that there were more Mrs. 'Arris books to be had! I do seem to have read them out of order, as this one is the fourth and final one. But you needn't have read any of the others to enjoy this one. Interestingly, there are a couple places where Mrs. 'Arris's previous exploits are briefly mentioned and they have footnotes to the other titles in the series. 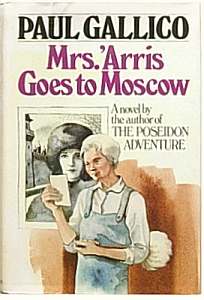 Once again the intrepid Mrs. 'Arris, a London char, ventures out into the wider world, dreaming this time of helping a pair of young lovers who have been separated. She wins a vacation trip to Moscow during the height of the Cold War, and the author, Paul Gallico, has a great time with all the prevalent Russian stereotypes of the inept bureaucracy, KGB brutality and ineptness, terrible food, dowdy fashions, etc.

She and her best friend, Mrs. Butterfield, are marched around Moscow by their Intourist guide, visiting all the obligatory sights. And they make rather pointed remarks about the country, the people they meet, and the general feel of the place. Their candid remarks inside Lenin's tomb are down-to-earth, practical, no nonsense cockney, and very funny. Mrs. 'Arris charms everyone she meets, well, except for those relentless KGB guys whom she outwits instead.

This is another light, breezy read that is quite entertaining, just like the story of her trip to Paris. It made for good cozy reading during a long, cold winter weekend. Of course, it is not particularly realistic. But it was fun, especially coming after my slog through 800 pages of Trollope! In the coming months I will seek out her other books when I'm in a funk.

Mrs. 'Arris reminds me of Mrs. Emily Pollifax, protagonist of a series of 14 spy-mystery books by Dorothy Gilman. Mrs. Pollifax, a sixty-ish New Jersey widow, works for the CIA on far flung (and far fetched) missions. She is just as charming and disarming as Mrs. 'Arris, and just as fun to read. I listened to the Pollifax audiobooks, which are very well done.