The Original Hero with a Secret Identity


Although I had heard of the novel called "The Scarlet Pimpernel" for ages, I never really knew anything about it, except that it had an odd title. A scarlet pimpernel, it turns out, is a common European wildflower related to primroses. And it is the symbol chosen by the book's hero to announce his daring deeds. 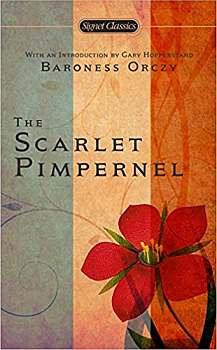 The rather breathless text on the back of book is a nice summary:

The year is 1792. The French Revolution, driven to excess by its own triumph, has turned into a reign of terror. Daily, tumbrels roll over the cobbled streets of Paris bearing new victims to the insatiable Madame Guillotine.... Thus the stage is set for one of the most enthralling novels of historical adventure ever written.

The mysterious figure known as the Scarlet Pimpernel, sworn to rescue helpless men, women, and children from their doom; his implacable foe, the French agent Chauvelin, relentlessly hunting him down; and the lovely Lady Marguerite Blakeney, a beautiful French exile married to an English lord and caught in a terrible conflict of loyalties -- all play their parts in a suspenseful tale that ranges from the squalid slums of Paris to the aristocratic salons of London, from intrigue on a great English country estate to the final denouement on the cliffs of the French coast.

Apparently this book was the first novel to have a hero with a secret identity, an idea soon copied in the tales of Zorro (1919), The Shadow (1931), Superman (1933), and Batman (1939), to name a few early examples. After the League of the Scarlet Pimpernel has saved a noblewoman and her children, the woman demands to meet their leader so she can thank him in person.

"Because the Scarlet Pimpernel works in the dark, and his identity is only known under the solemn oath of secrecy to his immediate followers." 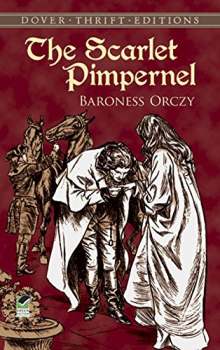 It's a ripping good story, full of suspense, intrigue, aristocratic snits, and a conniving bad guy. What I found most interesting was seeing the story of the French Revolution from the view of the English aristocracy. France and England didn't see eye to eye very often over the centuries, but the English aristocrats were quite disturbed at what was happening to the aristocrats in France. Could the revolutionary fever spread to England?

This is the first in a series of 16 historical fictions, including stories about the Pimpernel's ancestors, thereby probably inventing prequels as well!