I'm afraid this is going to be a bit of an HIBK review - Had I But Known that the plot was so heavy with Taiwanese World War II history, I probably wouldn't have read it. I liked the beginning but about half way through I got bored and restless. As someone who feels compelled to complete every book once started, I soldiered on (pun intended) and finished it. 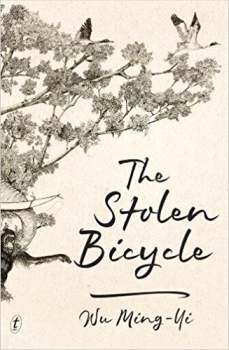 
A writer embarks on an epic quest in search of his missing father’s stolen bicycle and soon finds himself caught up in the strangely intertwined stories of Lin Wang, the oldest elephant who ever lived, the soldiers who fought in the jungles of South-East Asia during the Second World War and the secret worlds of the butterfly handicraft makers and antique bicycle fanatics of Taiwan.

Award-winning novelist Wu Ming-Yi is also an artist, designer, photographer, literary professor, butterfly scholar, environmental activist, traveller and blogger, and is widely considered the leading writer of his generation in his native Taiwan.


All the professional reviews I read praised it highly. It was longlisted for the 2018 Man Booker International Prize and won many prizes and honors in the author's native Taiwan. I somehow always feel that I should enjoy prize-winning novels, but I know that is an unrealistic expectation. Novels are many and divers, as are the tastes of the readers.

What I enjoyed was the information about the butterfly art, the elephants, and some of the bicycle details. In a history lesson, I learned that China gave up Taiwan to the Japanese after losing the First Sino-Japanese War in 1895. Japan ruled the island until 1945 and the end of WWII.

What I did not enjoy was all the detail about the fighting in the jungles on the mainland and the excessive Taiwanese bicycle lore. There are lots of characters as the story wanders back and forth in time and space, which I found a bit confusing. This is another book that needs a character chart and/or a set of family trees to keep it all straight. I think it is especially difficult when the names are not familiar ones from your own culture, but that could be just me.

The writing, or I should say the translation was easy to read, but I had two issues with it. First, it's a sloppy translation. I found numerous places where a word was left out that needed to be there, often part of a verb, sometimes just a random word. There are also instances of non-native sounding English. The translator is a native English speaker who has lived in Taiwan for a long time, and maybe that was the problem. However some editor or proofreader at the Australian publisher should have flagged the missing words and the odd syntax before publication. I also thought there were too many side stories which could have been shortened or eliminated altogether without harming the central story. Besides adding to the confusion, they made the book longer than it needed to be.

In the end, it's only so-so in my opinion. I just checked at Goodreads and found others had similar feelings about this book, but then again many loved it and praised its lyrical quality. I guess you will have to read it yourself for a definitive answer!

Email ThisBlogThis!Share to TwitterShare to FacebookShare to Pinterest
Labels: All the World, Novel, Translation