Is There a Home for Exiles?


I have read quite a few Salman Rushdie novels and enjoyed them all. But I was taken aback when I saw "The Wizard of Oz" in a list of his works, so I ordered it from my library. The essay and the short story that make up this little book were written in 1992, three years after the fatwa was issued against him for his novel "The Satanic Verses". In a sense, Dorothy and Rushdie are both exiles, both looking for a place called home. 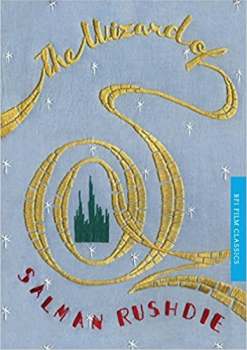 Rushdie writes that the film "was my very first literary influence", as he wrote his first short story at age 10 titled "Over the Rainbow". When he wrote "Haroun and the Sea of Stories" he was heavily influenced by the Oz story of the companions on a quest. Throughout the book you can tell how much he loves this movie, even as he watches it on tape, using a remote control to go back and forth, freezing frames, dissecting it, trying to find its magic.

He muses upon home and friendship as shown in the film, talks about differences from the original book, and also relates stories about the filming itself. There are stills from the film to jog your memory of the scenes he writes about. It is a very slight book and a quick, interesting read.