This whopping great tome was bought sight-unseen online for $4 (!) with free shipping. Usually I try to take a reference book out of the library first, to investigate, to see if I really need/want it. But this time I just went for it, because $4. And I am very glad I did! 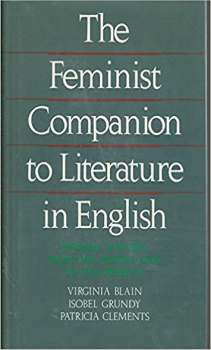 From Eleanor Hallowell Abbot (page 1) to Fay Zwicky (page 1,203), one finds 2,700+ annotations of women authors from the Middle Ages to 1985. At 500 words or less, each entry is brief but informative, giving parents, literary siblings, birth and death dates, short life synopses, and major works. The later entries have more detailed biographical information, as one would expect. The book includes

not only English women, but women writing in English in several national traditions, including African, American, Asian, Australian, Canadian, Caribbean, New Zealand, South Pacific, the British Isles; ... not only the canonized genres, but also diaries, letters, writing for children, and popular forms to which women have been relegated and which, often with joy, they have claimed.
Introduction, p. vii


The date selected for the endpoint is 1985, and the introduction says it does not include "women writing wholly or mainly since 1985". The book has not been updated since its publication, and I wouldn't expect it to be, since the web makes so much information available cheaply, and print books are so expensive. However I don't feel this is a hindrance. Books written by women since 1985 are fairly well-known or at least discoverable via the web. Whereas women writing in the Middle Ages and for hundreds of years after that are not so easily accessed or discovered.

As a book meant for browsing rather than straight reading cover-to-cover, it is great fun. When I see a new-to-me author mentioned in a blog, I grab it (carefully so as not to strain a muscle), and check her out. Or opening it up to a random page and reading a few entries may lead me to my library's online catalogue and placing a hold on a new-found treasure.

I imagine many libraries have a copy in their reference sections, although usually those types of books cannot be checked out. I did see other inexpensive used copies floating around the web, if you are inclined to buy one all for yourself.