"Mary Barton" tells the story of four Manchester families, but ultimately it's the story of the industrial poverty in Manchester, England, during a period that later came to be known as the "hungry forties". During the 1840s bad harvests, economic depression, and other issues led to severe poverty and hunger for the working class in Manchester, the heart of England's Industrial Revolution.

Mrs. Gaskell gives a very realistic portrayal of the impoverished workers and their families as they struggled to survive in squalid slums: very little clothing, shacks that were damp and drafty, little firewood for heat or candles for light, almost no food, children starving to death or freezing to death. Her scenes of everyday life are quite detailed and quite often grim. In this urban realism style she also shows us the prisons, courts & lawyers, the hostile relationship between workers and factory owners, and the nascent trade union movement. 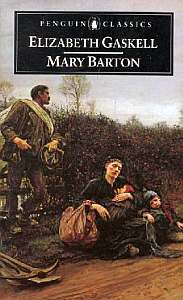 The main plot follows the lives of two families of mill workers, John and Mary Barton and their daughter Mary; and their friends George and Jane Wilson, son Jem, and George's sister Alice. Another family is also important, young Mary's friend Margaret Jennings and Margaret's grandfather, Job Legh. All three families are beset by poverty, disease, and death during the story. A fourth family is less talked about but pivotal to the plot: the wealthy mill owner John Carson, Mrs. Carson, and their son Harry.

In the first half of the book we see the extreme conditions in Manchester's poor neighborhoods and learn about the grievances of the workers against the mill owners. It's mostly the story of John as he becomes more and more bitter about his life and joins the trade union. A murder happens and the second half of the book is the tale of young Mary's efforts to prove the man she loves is innocent of the crime. The first half is taken up with lots of atmosphere and the plight of the poor. Then, having established the background, the rest is more of a murder mystery. There is a happy ending for some of the characters, although it involves a rather contrived plot device, pretty much a deus ex machina.

Like many other Victorian novels, it is long with a complicated plot. Is has lots of those long, involved sentences that were in vogue then, the type that require re-reading to understand. But it was not difficult to read and I enjoyed the story. Mrs. Gaskell was very gifted in the way she wrote about the characters' feelings. Sometimes I had to take a break because I was so caught up in the story and was anxious about what would happen next.

Luckily this large book does not have a cast of thousands like some. I found it easy to keep track of who was who, unlike in Anthony Trollope's "Can You Forgive Her" when I had to draw family trees to follow the many characters. Because the British historical background is pertinent to understanding the story, I was happy to have an annotated edition that explained the cultural references which are opaque to us today.

Elizabeth Gaskell is a writer that is perhaps overlooked by today's readers of classic novels, and I think that is a mistake. This was the first of her six novels and was very well-written. She also wrote a biography of her friend Charlotte Bronte, which The Guardian named one of the 100 best nonfiction books of all time in 2017.


The is my entry in the 19th Century Classic category for the 2020 Back to the Classics Challenge and it's also part of my reading for the 2020 Mount TBR Challenge.

Email ThisBlogThis!Share to TwitterShare to FacebookShare to Pinterest
Labels: Back to the Classics 2020, Mount TBR, Novel