What I've Been Reading Lately

Reading books is usually easy; reviewing them is often hard. For instance, I recently finished "Babbitt" by Sinclair Lewis (1922). Now for my dilemma: what can I possibly say that has not been said over and over in the last 98 years? Lewis won the Nobel Prize in 1930 and wrote many other notable novels suck as "Main Street" (1920) and "Arrowsmith" (1925). So what's new to say?

Another problem I have found with reviewing books is that I can read them a lot faster than I seem to be able to write about them. Since part of my reason for starting a book blog was to keep track of my reading and any thoughts about it, I feel bad about not reviewing everything. Earlier I found a solution for novellas and short essay books when I began my Short Reads Short Reviews series. But longer works have puzzled me.

Enter Quick Lit, a monthly meme on the Modern Mrs. Darcy blog. The creator is Anne Bogel, who explains that Quick Lit is where "we share short and sweet reviews of what we’ve been reading lately on the 15th of the month". So today I'm joining Quick Lit for four of my recent reads.

I'm pretty sure I had to read this in high school, but that fact is the only memory of the book I have. Well, that was over 50 years ago. Overall, I enjoyed reading "Babbitt". Published in 1920, it describes the world of my grandparents, one living in small town Wisconsin, the other in Buffalo, New York. The story satirizes the business culture and boosterism of American small towns, showing us a man, George F. Babbitt, who is having what I would call a mid-life crisis. Bored with his wife and kids, tired of his job as a real estate salesman, George tries out some changes in his life, but they don't really help him and eventually he goes back to being good old George F. Babbitt. The afterward, published in 1960, seems to make a lot more of this book than I do today, 60 years later. Our business culture is very different, and the small towns I've lived in don't go in for the sort of boosterism written about by Lewis. But as a picture of American history, it is enlightening. I especially liked his use of phonetic spelling to indicate the dialect being spoken.

This short novella won the 1980 Guardian Prize for Fiction and was nominated for the Booker Prize. It tells a story about a young shell-shocked World War I veteran trying to sort himself out after the war. Tom Birkin has been employed to uncover a medieval mural in an old Yorkshire church. It's a nostalgic tale of a nearly broken man recovering during an idyllic summer in rural post-WWI England. Another interesting theme is the artistic restoration and how Tom deciphers the life of the anonymous medieval painter. Although only 128 pages, the story sticks with me and I want to read it again soon.

I've owned this book for quite a while, so now it's part of my 2020 Mount TBR Challenge.

Linguistics, Why It Matters by Geoffrey Pullum
Polity, 2018

Words, reading, language, and foreign languages are all things that have intrigued me for most of my life. So I naturally gravitated towards linguistics, although it has taken me a while to get a handle on what linguistics is. This short introduction is well written and easy to read, not stodgy and "academic". The publisher's description is better than any I can come up with:


Language is the medium in which we humans compose our thoughts, explain our thinking, construct our arguments, and create works of literature. Without language, societies as complex as ours could not exist.


Geoffrey Pullum offers a stimulating introduction to the many ways in which linguistics, as the scientific study of language, matters. With its close relationships to psychology, education, philosophy, and computer science, the subject has a compelling human story to tell about the ways in which different societies see and describe the world, and its far-reaching applications range from law to medicine and from developmental psychology to artificial intelligence. 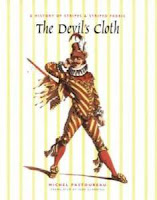 Subtitled "A History of Stripes & Striped Fabric", this book immediately caught my eye. My friends were gobsmacked when I began telling them about it and teased me about the odd topics that I choose to investigate. But really, did YOU realize that in 1254 the Pope and the brothers of the Carmelite Order began a dispute over the monks striped robes? The dispute involved several Popes and papal edicts and lasted until 1287, when the Carmelites capitulated.

The author is an authority on medieval heraldry and Western symbols at the Sorbonne in France. He noticed that in old images only the marginalized people wore stripes. Digging deeper into laws, customs, and regulations during the middle ages, he found that striped clothing or accessories were prescribed for divers groups in various jurisdictions: jugglers, clowns, prostitutes, serfs, bastards, the condemned, hangmen, lepers, cripples, heretics. A fascinating short cultural history!


So there you have my thoughts on my latest books. I think I'll stick with this Quick Lit meme. It lets me do short reviews and perhaps pique your interest in my choices.