It's the 1920s, the Roaring Twenties, and in the air is a feeling of novelty and newness, of getting away from the traditions of the past, of relief that World War I is over. Think of jazz, flappers, the Art Deco movement, and expat writers in Paris. With this spirit of modernity, in the early Twenties two women in their early twenties embarked on a summer in England and France, mostly unchaperoned. In this memoir, written nearly 20 years later, Cornelia Skinner and Emily Kimbrough recount their adventures and misadventures during that summer of freedom. 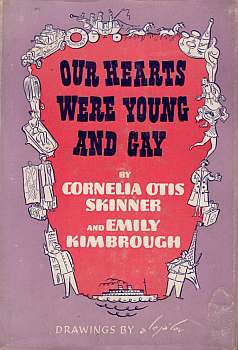 Every thing is new and exciting to them, not just the attentions of the young doctors they meet on the ocean liner but all the sights, sounds, and people in Europe. Written in the first person by Cornelia, this is a light and airy but very entertaining romp through the quaint Old World. I thoroughly enjoyed their little vignettes about France and England a century ago. And the stories about their clothes were quite funny - they never had the right outfits, although they tried hard to look sophisticated and glamorous.

Lots of unnerving things happen to them, some not of their own doing, such as when the ocean liner runs aground before they even leave the St. Lawrence River and they're stuck in Quebec for a week. Cornelia does get seriously ill en route to England, but she pulls through and makes a lively story out of it. Mostly they just get into scrapes because they are so unworldly, but they aren't in real danger except for their dignity. 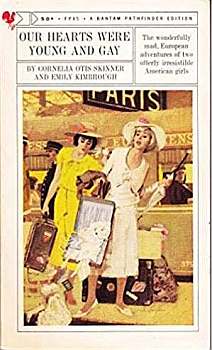 I felt almost as though I had been on a whirlwind mini-vacation with two charming but very young girls, for from the vantage point of nearly a century, they seem amazingly innocent for well-bred college girls. They claim to have first learned about the birds and the bees from exhibits at the Cluny Museum of the Middle Ages in Paris. Times have definitely changed!

The book was made into a motion picture in 1944, and was dramatized by Jean Kerr in 1946, but I haven't seen either of them. The movie publicity pictures I saw online just don't jibe with my mental pictures of Cornelia and Emily and their adventures. And I rather like my own images, so I'll stick to the book. Long ago there was a radio ad for NPR (National Public Radio) where a little boy said he liked radio better than TV because "the pictures are better." I agree!

This is my selection for Travel in the 2018 Back to the Classics Challenge.

Email ThisBlogThis!Share to TwitterShare to FacebookShare to Pinterest
Labels: Back to the Classics 2018, Humor