What fun to return to an old favorite and find that it's still a favorite! I have fond memories of Mrs. 'Arris from my first reading when I was in high school, and it has charmed me anew some 50 years later. Mrs. 'Arris is an ordinary char (cleaning woman) in 1950s London, who glimpses a client's Dior dress, falls in love with its beauty, and is determined to own one like it. She needs to possess that beauty, even though she would never wear such a dress.

It’s the most beautiful thing I’ve ever laid me eyes on and I mean to ’ave it.


She gives up every little thing she can do without in order to save for her 450-British-pound dream. Of course when she gets to Dior's shop in Paris there are complications she hadn't foreseen, not being a worldly woman. One doesn't simply buy a Dior off a rack and fly home that evening! During her stay in the City of Light she makes friends with some of the staff and clientele, who are quite taken with this small, determined British woman. She even performs a bit of match-making in that short week. 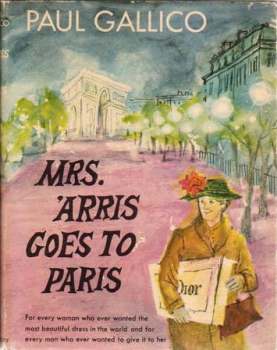 There's a 1992 made-for-TV movie of the book, staring Angela Lansbury, and I was shocked when I saw it because the movie ended after she got her Dior and went home, all smiles. The actual book has a more bittersweet ending, one that saves the tale from being too fluffy and sentimental. I won't spoil it here, but I wanted to point out the changed ending of the movie version.

This little novella is rather like an adult fairytale about the human desire for beauty, about determination and the kindness of strangers. With a bit of a twist at the end to give it a wider meaning.

This is my selection for Re-read A Favorite Classic in the 2018 Back to the Classics Challenge.

Email ThisBlogThis!Share to TwitterShare to FacebookShare to Pinterest
Labels: Back to the Classics 2018, Novella