Agatha Christie, you ask? Sure, we all know Agatha from her stories about Miss Marple or Hercule Poirot. Yes, we say, "The Seven Dials Mystery" should be an entertaining book. We begin to read... and then confusion ensues. Imagine a nice British country house party of the 20s or 30s, full of titled upper class folk, the idle rich, and their stalwart servants. Present are all the usual slightly nutty types a la P. G. Wodehouse, a stuffy Lord, a ditzy Lady, fun-loving, carefree young folk with money to burn, a supercilious gardener. Sir Oswald and Lady Coote surely must know Bertie Wooster! 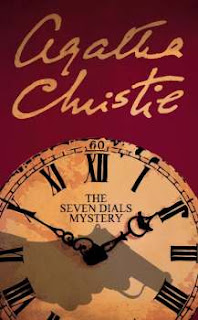 It's Wodehouse in a lower key; no one is quite as smart as Jeeves, nor quite as fatuous as Wooster, and for silly names we have only a girl named Socks, the male secretary, Pongo, and the amateur detective, Lady Eileen Brent, known as Bundle. But then drop in a serious mystery complete with several bodies, a Russian countess, a furtive society, German agents, and a secret industrial process. The events happening at various grand estates verge right on the edge of being zany, but are held in check by the ever-present threat of more deaths occurring.

The mystery itself is perplexing and kept me guessing until the very end. All my suspects were innocent - of the crimes, if not of deceptions. Later I found out it is number two of five in the Superintendent Battle series. Oddly enough number three in that series, "Cards on the Table", is also number 13 in the Hercule Poirot series, which I have already read. I guess I need to hunt up numbers one, four, and five now to complete the set.

Don't get me wrong, I liked this book a lot, it just wasn't what I had expected from Agatha Christie! A quick, enjoyable read. And it's a classic crime story for the Back to the Classics 2018 challenge.