The Pearl of the World

This slim book by Nobel-laureate Steinbeck has been called a simple story about simple people. It feels like a very old fable, whose lyrical writing sings in your head as you read it. Wikipedia says Steinbeck heard the tale on a trip to Mexico, and first turned it into a short story, then this novella, and finally a screenplay for a Mexican American movie.

It's the story of an impoverished Mexican pearl diver, Kino, his wife Juana, and their infant son, Coyotito. One day Kino finds a huge pearl, the Pearl of the World. But instead of the good new future he envisions for his family, other people's greed and betrayal overwhelm him and his hopes. The writing is very evocative and affecting. I had a slight feeling of doom throughout, which made it hard to continue reading sometimes. 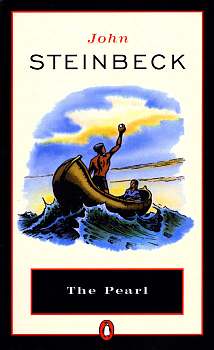 This was my first Steinbeck novel and I loved the writing style, despite the rather downbeat story. I need to add some of his other works to my To Be Read list. I've been trying to read more works by authors who won a big literary prize, e.g., Nobel Prize, Man Booker Award, Women's Prize for Fiction (née Orange Prize), Pulitzer, etc. This my Back to the Classics entry for a classic by an author that's new to you.


Wikipedia says that the movie, La perla (The Pearl) is a 1947 Mexican American film by the acclaimed director Emilio Fernández. In 2002, the film was selected for preservation in the US National Film Registry. I hadn't heard of this Film Registry before, but it is a program of the Library of Congress. On it's web pages it says:


[The National Film Registry] is a list of films deemed "culturally, historically or aesthetically significant" that are earmarked for preservation by the Library of Congress. These films are not selected as the 'best' American films of all time, but rather as works of enduring importance to American culture. They reflect who we are as a people and as a nation.

They add 25 films each year to the list. All the titles and many descriptions are listed on the web site. Maybe the start of a To Be Seen list?

Email ThisBlogThis!Share to TwitterShare to FacebookShare to Pinterest
Labels: Back to the Classics 2018, Classics Club, Novella