I enjoyed Christie's "The Seven Dials Mystery" [my review is here] that I chanced upon at the library recently, and then realized it was listed as #2 in the Superintendent Battle series at Amazon.com. So back I went to retrieve book #1, "The Secret of Chimneys", and it's another nice mystery tale with many of the same lead characters.

The story takes place at Chimneys, the English country house setting of both books, but this time it's a weekend of political intrigue, with a house full of diplomats, aristocrats, and royalty, plus a few detective types, both professional and amateur. The plot involves the fictional Balkan country of Herzoslovakia, with its history of revolution, the murders of the King and Queen and of several recent Presidents. Prince Michael, the next in line, is maneuvering to get back the throne, financed by selling the rights to the newly discovered Herzoslovakian oil supplies. Several bodies are found in mysterious circumstances, a memoir by the late Herzoslovakian Prime Minister is threatening to start a European-wide war, a long-lost jewel is sought by a notorious jewel thief, and a bundle of blackmail letters are not what they seem. The requisite number of plot twists ensue and several characters are not who you were lead to believe they are. Quite satisfying and I never guessed the solution. 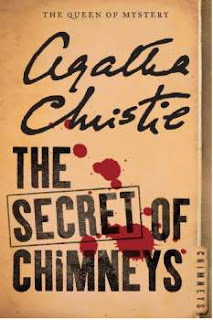 A lot seemed to happen in this book. People weren't just sitting around flirting or discussing the latest racing results to while away a weekend in the country. Important developments kept happening at a fast pace. There are quite a few characters, but most of them are talked about frequently and take part in the action, so it's not too hard to keep them straight, although now and then I did lose track of who Baron Lolopretjzyl was - and don't ask me how to pronounce that name!

Well, it's three down, two to go in the Inspector Battle 5-book series, although I'm not quite sure it really is a series. This 1987 copy of "The Secret of Chimneys" makes no mention of one, nor does the official Agatha Christie web site. Maybe the idea of calling them a series came from a publisher more recently. Both this book and "The Seven Dials Mystery" do feature a group of the same characters, so they are related in a way. Book #3 "Cards on the Table" is usually portrayed as a Hercule Poirot novel. It has four sleuths, including Poirot and Battle, trying to solve their dinner host's murder. I haven't yet read the other two, but for Book #4, "Murder Is Easy", Wikipedia says "Christie's recurring character, Superintendent Battle, has a cameo appearance at the end, but plays no part in either the solution of the mystery or the apprehension of the criminal." Battle does seem to be back in charge for Book #5, "Towards Zero".

Series or not, "The Secret of Chimneys" is fast-paced and entertaining!