Anthony Grafton wrote this book to accompany an exhibition at the New York Public Library on the 500th anniversary of Columbus landing in the New World. It is an in-depth look at how Europeans dealt with the discovery of the new lands and the people living there, which weren't mentioned in the Bible and therefore could not exist. I had never before realized just how literally they took the Bible in the Middle Ages, and what a big disruption the New World was at the time. 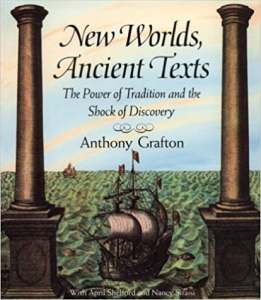 Many wonderful images of engravings from 15th- and 16th-century texts are included on the oversized pages (8" x 9.5"). The text is not dry, difficult, or overly academic, despite the fact that Professor Grafton is quite an influential scholar from Yale University, with lots of weighty books to his name.

The scope of the book is so large, that I find it hard to summarize, so I am copying in the text from the book flaps:


On encountering what he called "the Indies," the Jesuit José de Acosta wrote, "Having read what poets and philosophers write of the Torrid Zone, I persuaded myself that when I came to the Equator, I would not be able to endure the violent heat, but it turned out to be otherwise... What could I do then but laugh at Aristotle's Meteorology and his philosophy?" Acosta's experience echoes that of his fellow travellers to the New World, and it is this experience, with its profound effect on Western culture, that Anthony Grafton charts. Describing an era of exploration that went far beyond geographic bounds, this book shows how the evidence of the New World shook the foundations of the old, upsetting the authority of the ancient texts that had guided Europeans so far afield.

The intellectual shift mapped out here, a movement from book learning to empirical knowledge, did not take place easily or quickly, and Grafton presents it in all its drama and complexity. What he recounts is in effect a war of ideas fought, sometimes unwittingly, by mariners, scientists, publishers, and rulers over one hundred fifty years. He shows us explorers from Cortes and Columbus to Scaliger and Münster, laden with ideas gathered from ancient and medieval texts, in their encounters with the world at large. In colorful vignettes, firsthand accounts, published debates, and copious illustrations, we see these men and their contemporaries trying to make sense of their discoveries as they sometimes confirm, sometimes contest, and finally displace traditional notions of the world beyond Europe.

The fundamental cultural revolution that Grafton documents still reverberates in our time. By taking us into this battle of books versus facts, a conflict that has shaped global views for centuries, Grafton allows us to re-experience and understand the Renaissance as it continues to this day.

I thoroughly enjoyed this book and I learned a lot from it, but I'm sure I could absorb even more from a second reading. Highly recommended!