Back to the Classics 2018: A classic with a single-word title

"Celestina", also known as the "Tragicomedy of Calisto and Melibea" or "The Spanish Bawd", is quite a book. Still in print after 519 years, it trails a small army of students, critics, and professors of Spanish literature in its wake, producing piles of scholarly articles and books! This translation by Peter Bush is in easily-read modern English. 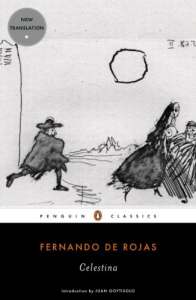 An engaging tale of lust and love, the story is funny, bawdy, and crude. Calisto is a wealthy young man who falls violently in love with a chaste maiden, Melibea, after meeting her once. The plot is about his attempts to woo her using the local bawd (madam, pimp, procuress) and possible witch, Celestina. Calisto's servants are always mocking him behind his back, when they aren't with some of Celestina's girls. Most of the characters are rogues and scoundrels, yet they keep invoking God's name and praying. Basically the book is a parody of the Courtly Love found in the popular romances of the day, but with a tragic ending instead of the typical weddings of the romances.

I read this book more for its historical importance than for the quality of story itself. I'm taking an online course about "Don Quixote" by Miguel Cervantes, written one hundred years after "Celestina". In the course readings and lectures, "Celestina" has been mentioned frequently. Plus many lists of "100 best novels" include it, so I thought I should check it out. 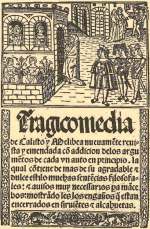 Its unique, wholly original feature is that the entire book is written in dialogue. There is no narrator to set the scene or explain the action, which can make it tricky to keep straight who's talking. However the translator has added some narrative phrases here and there, such as "suggested Celestina" or "Sempronio grunted to himself", and this does help keep the reader on track.

Some call "Celestina" the first European novel, considered second in importance only to Don Quixote in Spanish literary heritage. I discovered that the word "celestina" is even listed in the Spanish dictionary as a "go-between" or "procuress", proving the lasting effect the book has had on Spanish culture over the centuries. In 1904 Pablo Picasso painted this portrait called "Celestina": 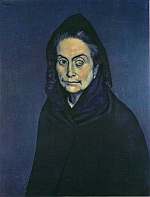 There is a long article about the book online at the LA Times website, written by one of the all-time great Spanish authors, Juan Goytisolo, who also wrote the introduction to the book I read.
"Celebrating the 500th Anniversary of Spanish Literature's Most Audacious and Subversive Work", Juan Goytisolo, 1999.

I enjoyed "Celestina" and found parts of it quite funny.

Email ThisBlogThis!Share to TwitterShare to FacebookShare to Pinterest
Labels: All the World, Back to the Classics 2018, Classics Club, Novella, Translation