Book Beginning: This Side of Paradise by F. Scott Fitzgerald

Amory Blaine inherited from his mother every trait, except the stray inexpressible few, that made him worth while. His father, an ineffectual, inarticulate man with a taste for Byron and a habit of drowsing over the Encyclopedia Britannica, grew wealthy at thirty through the death of two elder brothers, successful Chicago brokers, and in the first flush of feeling that the world was his, went to Bar Harbor and met Beatrice O’Hara. In consequence, Stephen Blaine handed down to posterity his height of just under six feet and his tendency to waver at crucial moments, these two abstractions appearing in his son Amory. 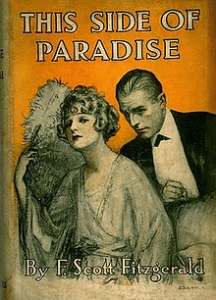 This book was the debut novel for F. Scott Fitzgerald and was first published in 1920. All I know about it is that it "examines the lives and morality of post–World War I youth", according to Wikipedia. This was the beginning of the Jazz Age, The Roaring Twenties, so it should be an interesting contemporary account of the early stages.

Email ThisBlogThis!Share to TwitterShare to FacebookShare to Pinterest
Labels: Beginnings