Book Beginning: On The Art of Reading by Arthur Quiller-Couch

In the third book of the "Ethics", and in the second chapter, Aristotle, dealing with certain actions which, though bad in themselves, admit of pity and forgiveness because they were committed involuntarily, through ignorance, instances 'the man who did not know a subject was forbidden, like Aeschylus with the Mysteries,' and 'the man who only meant to show how it worked, like the fellow who let off the catapult' ([Greek: e deixai Boulemos apheinai, os o ton katapelten]). 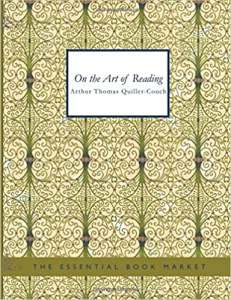 OK, so this is going to be a bit of a challenge, not easy stuff! I have read that it gets much less high-brow as he goes on with the lectures. An article in The Cambridge Quarterly of September 2014 says:

Vast numbers of self-help readers after the First World War were keen to develop their literary taste and gain confidence in navigating their way through the literary field; Quiller-Couch's innate understanding of this "new reading public" accounts for the extraordinary success of his published lectures.


It's always good to have a meaty book in the current reading pile!