This book is part of Oxford University Press's "A Very Short Introduction" series, now 691 books strong. From Abolitionism to Zionism, from Lincoln to Rousseau, from Advertising to Sleep, and everything in between is discussed in a very accessible way in about 125 pages each. I read "Italian Literature" a couple years ago and enjoyed it, so now I'm searching out more on topics I am curious about, where I don't want to digest an entire 500-page tome on the topic. 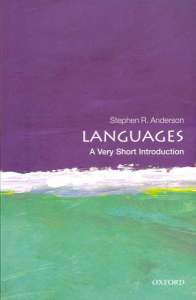 I find it hard to summarize this type of book, so I'm giving you the publisher's blurb about it:

How many languages are there? Are new languages still being discovered? Why are so many languages disappearing? In this Very Short Introduction, eminent linguist Stephen Anderson addresses such questions as he illuminates the science behind languages. Considering a wide range of different languages and linguistic examples, Anderson provides the basic facts about the world's major families of spoken languages and their distribution around the globe. He explores the basis for linguistic classification and raises questions about how we identify a language. Considering signed languages as well as spoken, Anderson also examines the wider social issues of losing languages, and their impact on vanishing cultures and peoples.


The discussion about how many languages there are was fascinating. I never realized how hard it is to count them. Anderson gives a lot of analogies to biological systems that are more familiar than linguistic ones, and that helps clarify many of his points.

The section about signed languages is also very enlightening. Unless you happen to know a deaf person who signs, you probably don't understand how signing works as a language - I know I didn't. This is necessarily a very broad introduction, but it gives me a context for other language-related topics I encounter.