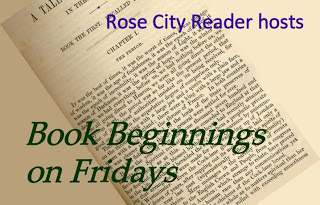 Book Beginnings is a weekly meme hosted by Rose City Reader. You are asked to share the first sentence (or so) of the book you are reading, along with your initial thoughts about the sentence, impressions of the book, or anything else the opener inspires.

"If there is a more hideous language on the face of the earth than the American form of English, I should like to know what it is!"  Baron Somers, in the House of Lords (1979)

Americans are ruining the English language. I know this because people go out of their way to tell me so. I am a magnet for such comments - an American who dares to teach English Language and Linguistics at a British university and who has the chutzpah to write about American and British languages differences on the internet. What a fun start! I love books about English and British English. When I first visited Britain I discovered our languages are maybe 75% the same. Sure, we use most of the same words, but the Brits use some of them differently than we do, and they pronounce some quite oddly, too. And then there is "gobsmacked", "chuffed", and "fairy liquid". I'm chuffed to be reading this book before my fall trip to Britain!