Subtitled "Famous Book Titles and How They Got That Way", this is an entertaining little book full of anecdotes about the process of titling a book. There is no narrative as such, just vignettes organized by the authors' names plus some lists of thematically-related titles, such as "numbers in titles" or "planets and moons in titles". Scattered throughout are black-and-white illustrations which appear to be from very old books and bookplates. 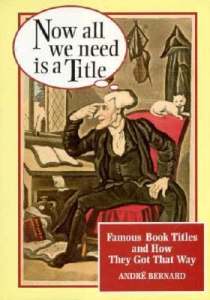 Some stories are told by the authors themselves or their editors, a few are quotations from a book wherein the character talks about creating a title. I found many interesting titbits, like the fact that E.E. Cummings published a book in 1930 with no title at all, and Fitzgerald's working title for "The Great Gatsby" was the amazingly clunky "Trimalchio in West Egg"!

In the only known instance of a book's title predicting its fate, the first printing of John Steinbeck's 'The Wayward Bus' was destroyed when the truck transporting the books from the bindery crashed in flames. The truck had been hit by a "wayward" bus that had been traveling down the wrong side of the road. p. 106


It was Lewis Carroll who came up with the idea of putting the title on the dust jacket, and his 'The Hunting of the Snark' was the first book to be published with a printed jacket in 1876.

If you love books and the stories behind them, this is the book for you. The format makes it perfect for dipping into at odd times, when your current read (or life) is getting a bit heavy.

NOTE:
Trimalchio is a character in the 1st century AD Roman work of fiction "Satyricon" by Petronius. He is an arrogant former slave who has become quite wealthy by tactics that most would find distasteful. -Wikipedia