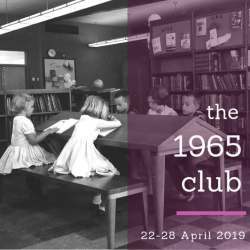 Today's the start of the #1965Club, presented by Simon at Stuck in a Book and Karen at Kaggsy's Bookish Ramblings. They pick out a year and everyone reads and reviews books published during that year. Sounds like fun! Plus since I graduated from high school in 1965, I thought it would be interesting to see what was happening in the wider world as I was being unleashed upon it.

As this was a last-minute decision, I have no idea if any of the books I own are from then, so I have some on order from the Cincinnati Public Library. I've been reading the Mrs. 'Arris series lately, and I see Ada is off to be an MP now. And just yesterday I decided to read and re-read Vonnegut novels, so there's one of his. And I loved Dodie Smith's "I Capture the Castle" so I'll check out another of hers. I'm hoping to finish 2 of them this week.


UPDATE: After reading a favorable review of another 1965 novel, I've downloaded it to my Kindle! So I'm currently reading Roseanna: a Martin Beck mystery by Maj Sjöwall and Per Wahlöö. Translated from the Swedish by Lois Roth.