The novel "Grand Hotel" was a best-seller in its original 1929 German version and the American film version won an Oscar for Best Film of 1933. Recently the New York Review of Books has returned it to print as part of their Classics series. 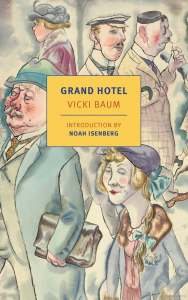 The setting is Berlin after the Great War and just before the Great Depression. In the Grand Hotel, Berlin's fanciest and most expensive place to stay, we discover the stories of some of the guests passing through. A famous ballerina at the end of her career, a badly maimed and despondent veteran, two factory employees from a small town - a bullying manager and his underling who is dying from an unnamed medical condition, a glamorous Baron, a young woman trying to make her way in the world. They meet and mingle, group and regroup for excursions into the city, and tell each other stories from their lives.

Between the omniscient narrator and the conversations we overhear, each of the characters comes to life. It's not a very long book, but somehow Ms. Baum lets us know the essence of each of them, their fears and desires, their good and bad sides. I though she described the characters so well that I knew them and sympathized with them.

The hotel staff are also minor characters, attending to the guests, and assuring that the Grand Hotel is kept functioning smoothly. Berlin itself is almost a character, as its modern attractions and strong nightlife are woven into the stories.

"Grand Hotel" was one of the first works of art to use the conceit of a hotel as a framework for the stories of the people passing through it. In the 90 years since its publication, there have been many films, books, and plays with this structure. The hotel guests come for a while and then move on as others take their place. The motif of the big revolving door in the front lobby emphasizes this ceaseless flow of people. We learn their stories and then they pass out. There is no conclusion, no tying up of loose ends. 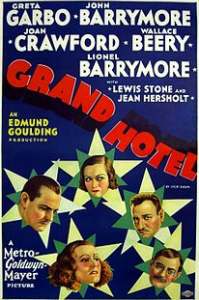 The Oscar-winning movie is perhaps better known that the book. It was packed with stars: Greta Garbo, John and Lionel Barrymore, Joan Crawford, and Wallace Beery. This the movie where Garbo, as the exhausted ballerina, utters the line that followed her ever after: "I want to be alone."  A Fun Fact according to Wikipedia: "To date, it is the only film to have won the Academy Award for Best Picture without being nominated in any other category."

I recommend reading the book, whether or not you see or have seen the movie. The writing is excellent, as is the translation. The guests of the Grand Hotel are going to stay with me for a long time.

This is my entry for the Back to the Classics 2019 Challenge, in the Classic in Translation category.

Wikipedia entry on the film, which includes a link to a short trailer
https://en.wikipedia.org/wiki/Grand_Hotel_%281932_film%29

Email ThisBlogThis!Share to TwitterShare to FacebookShare to Pinterest
Labels: Back to the Classics 2019, Novel, Translation