Murder and Intrigue with Elephant


The is the first book in a cozy mystery series set in modern India, "A Baby Ganesh Agency Investigation". As the book opens, Inspector Ashwin Chopra from the Mumbai (née Bombay) police is starting what will become a very memorable day: a body is discovered, he retires early for health reasons, and he inherits a baby elephant from an uncle. 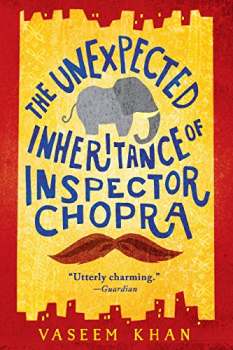 The mystery felt very much imbedded in India, not one that was simply dropped into an exotic local for effect. Mumbai and its people and culture are very much a part of the story being told. Values of honesty and virtue are discussed and the family is paramount in the characters' lives. Khan gives vivid details of the residents' daily lives, middle class and poor alike.

Inspector Chopra is a complex man, much given to musing about his actions, his family, his values, and what retirement means for him. To me he seems akin to Inspector Armand Gamache of the Sûreté du Québec in the Louise Penny mystery series, another complex, thoughtful police inspector. They are the Good Guys, the honest, upright, caring individuals who feel compelled to fight the world's evil, although Gamache's books are grittier and not cozy mysteries. I just think the two men would hit it off rather well.

Then there are the elephants. Inspector Chopra spends time learning about his new charge and we learn about the care and feeding and emotional lives of elephants. Since I have always been very fond of elephants and elephant images, I knew this series would be just the thing for a summer read, very charming, and who can resist a baby elephant named Ganesha as a sidekick to a detective? Bonus: there are now 4 more books in this series!

Vaseem Kahn's website
The author has a newsletter, a glossary of Indian words, some baby elephant pictures, and general information about himself. You can also join The Reading Elephant Book Club with a quarterly newsletter.