I came across this novel in the same way I think a lot of people do these days, in a list of free Kindle books on Amazon.com. As a lover of stained glass, the title caught my eye, and it had some decent reviews online, so I gave it a try. It's a nice cozy mystery with a bit of the Had I But Known school of writing. 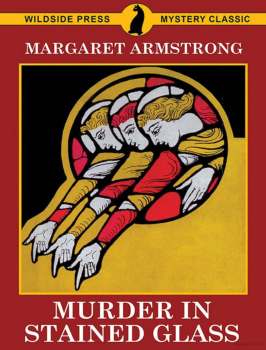 Miss Trumble, a spinster in her late forties, leaves her comfortable Park Avenue apartment in New York City for Bassett's Bridge, a small New England town, to visit Charlotte, a woman she knew in boarding school. When a famous stained glass artist dies in the town, suspicion falls on several people, including the artist's son, Leo. Charlotte's niece, Phyllis, is in love with Leo, so Miss Trumble starts to investigate to clear his name. She ferrets out a lot of the town's gossip, learning many secrets that might or might not be important. There are various plot twists right up to the end, and I must admit I did not see the solution coming at all.

The setting for the story is early 20th century America, and the scenes in the Fashionable Society of New York City are quite interesting. Ms Armstrong would have been writing about a time in the recent past, maybe 10 years out, so we get a good glimpse of how people lived then, urban and rural.

I liked this story as it reminded me of the Agatha Christie books I've read, as well as some other cozies I like. Unfortunately Miss Trumble does not reappear to solve another crime. This was Margaret Armstrong's first novel, published when she was 72. Two more appeared in the following years, "The Man with No Face" (1940) and "The Blue Santo Murder Mystery" (1941). But, alas, no Miss Trumble.

Margaret Armstrong was a well-known book cover designer in the days when the image was imprinted directly onto the cover of a book, before dust jackets took over. Some examples are shown in the nice biography of her found on The Passing Tramp blog: