"Santal" is a very slim book, really a short story, easily read in one sitting. I'd call it a fairy tale set in North Africa, with religious overtones, very lyrical and poetic. But it is hard to describe it or even give you the flavor of it without giving away the whole story. I'll copy the text from the back cover, as it sums it up so well:

This novella by the British novelist Ronald Firbank begins in a mosque, and follows the young boy, Cherif, home through a fantasy vision of a North African community, with palm-laden streets and colorful bazaars.

But the young boy is disinterested in the outer beauty of the world, and instead seeks the spiritual adventure, exemplified by the mysterious Prophet living in the desert. From the busy house of women - mother, aunts, and sisters - Cherif escapes to undergo a long and arduous journey to find the Prophet, The All-Knowing One.

The fact that Firbank's unusual tale ends in the boy's failure and resignation towards death only reiterates the theme of this Firbankian work: the sensual and the spiritual are in eternal war, and a truce between the two is at best fleeting. 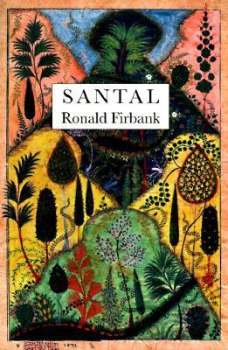 While not well-known today, Ronald Firbank was an influential British novelist in the early 1900s, and many more famous authors have sung his praises and been influenced by his novelistic style. This story is apparently not typical of his novels, which are described as "written in a witty, satiric style."

I am glad I read it, and I am still pondering what I think it means. Not something I can say about too many books. By the way, "santal" is French for "sandalwood."

Email ThisBlogThis!Share to TwitterShare to FacebookShare to Pinterest
Labels: Novella