Growing Out of Bachelorhood


I bought this book at a used bookstore because it was by a woman author in the 1930s. As a regular reader of Scott's Furrowed Middlebrow blog, I am intrigued by reading novels by female authors between WWI and WWII. It's an interesting time in history as many parts of everyday life had recently changed or were just about to change. So these novels show us the way things were at that time.

Our titular bachelor (confirmed) is Scott Farrington, a New York City native with enough money to live the high life without working: drinking to excess throughout Prohibition, partying, carousing, travelling first class on ocean liners. In his thirties he was hospitalized for months with a serious illness and almost lost his eyesight. 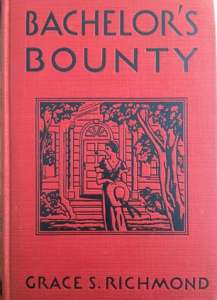 As the story opens, Scott is moving to the country for a year on his doctor's orders, to dry out and calm his nerves. He settles in a small Connecticut hamlet in an old rundown house on the river, planning on writing a play. His next door neighbors are a 45-year old invalid and his 24 year old daughter-caretaker. Unlike the rest of the country folk, Jeremiah and Barbara Keane are well-educated, thoughtful, and very engaging people.

Soon his life gets complicated when Caroline, the glamorous widow of his best friend, abruptly decides to go off to Egypt and leave her 6-year-old son with Scott. An interesting new neighbor, a small and gossipy hamlet, a small boy who must be accounted for, and various people from his New York City social set flitting in and out of his house set the stage for the drama. Not to give away the story, but in the end Scott realized he has grown up a lot, plus there's a happy ending for him.

As for the title, it doesn't refer to Scott having several women in his life as I first thought. Somewhere he muses about the phrase "bachelor's bounty" and says it means that as a bachelor he is committed to a life of giving presents to all his married friends' children. I can't find that quote now, of course.

Despite rather mediocre writing, I enjoyed the book. After a few chapters it suddenly seemed like the script for a 1930s movie. I saw Cary Grant in the lead, Audrey Hepburn as the ingénue next door, maybe John Barrymore as her dad, Jean Harlow as Caroline. It really should have been made into film back then.

Grace S. Richmond wrote 27 novels between 1905 and 1936, some of which my library has, so I might try out another one. I'd like to see if she makes other independent women out to be heroines. This book would not be mistaken for feminist literature, but the sensible, intelligent woman is shown as much more desirable than the flighty one who trades on her looks and is a drama queen.

Email ThisBlogThis!Share to TwitterShare to FacebookShare to Pinterest
Labels: Back to the Classics 2020, Novel