I don't think of myself as a mystery reader, and yet for the last month I've been speeding right down the Mystery Lane, er, bookshelf - a couple of Agatha Christies, a Margaret Armstrong, and now a surprising entry from Alan Alexander Milne. Yes, that's A. A. Milne of Winnie-the-Pooh fame, writing for adults in his only mystery novel. 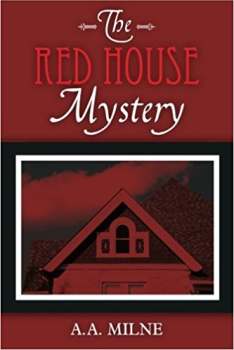 Before Pooh, Piglet, Eeyore, and the rest debuted in 1924, Milne had written stories for the British humor magazine, "Punch", several plays, and a few other novels. The title page of "The Red House Mystery" (1922) identifies him as the "Author of 'Mr. Pym Passes By,' 'The Dover Road,' etc.", which are both plays.

The book is dedicated to his father: 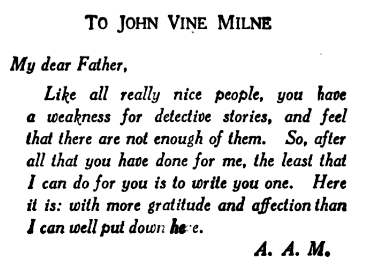 This is probably a cozy mystery, although the amateur detectives are men, and women dominate that genre these days. But it is set in a small English village, nothing very violent is described, and the amateur sleuths ferret out lots of gossip to help solve the crime and best the police at their game - all good cozy mystery attributes.

The plot is not overly complicated, but it is a devious and misleading one. Once again, I only half figured out who dunnit. Mostly I ruled out a lot of the suspects in my mind, but the ending was a surprise.

The main characters, Antony Gillingham, a gentleman of means, and his young friend, Bill Beverly, decide to play detectives and solve the murder of Bill's friend Mark Ablett. They approach this task in a rather light-hearted way at times, calling each other Holmes and Watson. The first Sherlock Holmes story was published by Arthur Conan Doyle in 1887, so this is not surprising in a 1922 novel. It also turns out that Milne knew Doyle. According to a story on the BBC website:


Peter Pan author JM Barrie, a cricketing fanatic, gathered the most famous writers of his day to play on his amateur team - the oddly-named Allahakbarries - between 1887 and 1913. The team members included Arthur Conan Doyle, PG Wodehouse, AA Milne and Jerome K Jerome.
http://news.bbc.co.uk/2/hi/entertainment/8662375.stm


The dawn of celebrity sports teams! I love finding out that famous authors were, in fact, friends long ago. And it makes me wonder if there are other references to each other's work to be found? Some sleuthing required...

Milne made his fame and fortune from the books of Pooh stories and poems. However, I wish he had penned a few more mysteries as I enjoyed this one. It's my pick for the Back to the Classics 2018 Challenge - A classic with a color in the title.